Yesterday, I attended my third MathsConf in Birmingham – #MathsConf17. As ever, the day was so much fun and is the most excellent CPD  – I cannot thank Mark (@EmathsUK) and the whole team at La Salle Education (@LaSalleEd) for the work that they put into organising these events. If you’ve not been to one yet, take a look at the upcoming list of locations and dates and come along! You won’t regret it.

I arrived in Birmingham on Friday night with one of my colleagues, which was an excellent opportunity to catch up with some Maths education Twitter friends. As you may expect, the conversations quickly turned into sharing and solving interesting maths problems and sharing ideas for enrichment lessons. My offering was this excellent area maze puzzle, which certainly caused a few headaches!

On the day itself, after some opening remarks from Mark McCourt and Andrew Taylor (@AQAMaths), including a huge thank-you to the amazing Rob (@RJS2212) for all that he does by selling raffle tickets and organising tuck shop, it was time for speed-dating.

From speed-dating, I took away the following ideas (apologies for lack of credits – completely forgot to write down names):

After speed-dating, session 1 began! I attended Literacy in Mathematics by Jo Locke (@JoLocke1). I’ve met Jo several times before (and had dinner with her on Friday!), but it was my first time seeing her deliver a session, so I was really looking forward to it. Jo made the point that we are all teachers of literacy, and that students with low levels of literacy will go on to underperform in Maths, if they are not able to access what is being asked of them. This really resonated with me.

It’s also worth pointing out that I teach lots of students who I would describe as having excellent literacy – their spelling and grammar is always impeccable, and they can speak and write eloquently. Even then, I’ve seen students like this fall apart in exams if the word ‘integer’ is used, and I’ve seen similar students look astonished when asked to write down ‘the range of solutions which satisfy an inequality’. Mathematical language needs to be taught clearly and explicitly, and this is something that I have definitely neglected in the past.

Jo shared lots of different resources and strategies to ensure that our students develop the literacy skills that they need. A key takeaway for me was discussing etymology with our students; she made the point that students are frequently really excited to hear about the origins of interesting mathematical words, and so I am going to make more of an effort to do that when teaching. Even aside from student interest, I think it can help to develop their long-term recall of key ideas. If, for example, we explain how algebra is taken from the Arabic meaning ‘the reunion of broken parts’, then this leads into the process of what it actually means to solve an equation.

The other idea that Jo shared that I loved and will definitely be using was Frayer models. This is an idea which I feel sure I must have seen at some point before, but have definitely need used in the classroom. The model looks like this, and can be used in various different ways. 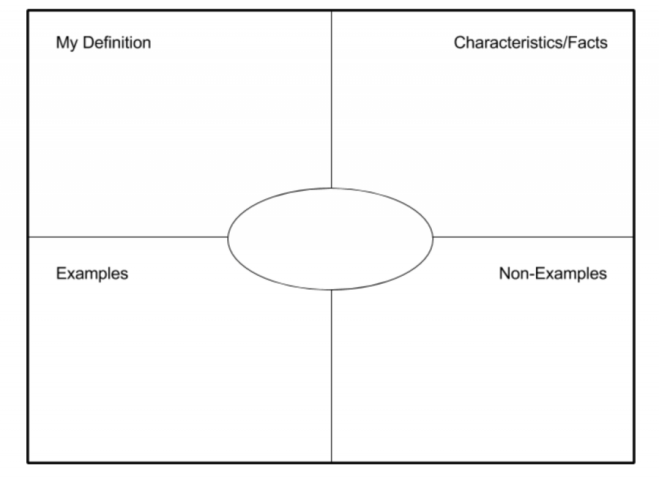 For session 2, I attended Bernie Westacott’s (@berniewestacott) session on ‘Making Maths Memorable – Progression in Fractions’. Again, this was my first time seeing Bernie speak and I was not disappointed!

Bernie focused on the use of different representations of fractions and how we can use these to support students to acquire a conceptual understanding. We had the opportunity to explore Cusinaire rods, Numicon and Multilink cubes, and build various models to represent various problems. Throughout, Bernie discussed the influence of ‘Singapore Maths’, and how that approach can be used in British classrooms to ensure our pupils can become as successful as possible.

Now, to be completely honest: with the exception of the odd box of multilink cubes, I don’t make use of manipulatives in my classroom. This is partly because we don’t have other equipment, but primarily because I don’t know how to use them effectively! The reason that I found Bernie’s session so useful, in spite of this, is that it gave me a much better insight into what is going on in primary Maths classrooms at the moment, and I think a better understanding of what our students will have been previously exposed to can only improve the quality of teaching and learning.

The other reason that I found it so fascinated was how careful and precise Bernie was with all of his language used throughout. If students are not 100% fluent with the idea that the parts of a fraction must all be equal, then any subsequent teaching is being built on shaky foundations. As such, rather than using the word one half to describe ‘1/2’, Bernie described it consistently as ‘one out of two equal parts of the whole’. ‘2/3’ became ‘two out of three equal parts of the whole’, and so on. This was fascinating, and it has certainly made me think about adding and subtracting fractions and the language that I am using then. We also looked briefly at division, and how it can be interpreted in a number of different ways. Again, this is something that I typically gloss over in the classroom: I am going to make more of an effort to slow down to allow my pupils to explore the nuances which are lost when going at speed.

I led a workshop for Session 3 (my solo #MathsConf debut!), entitled ‘Tackling Re-Teaching’. I am not going to speak about it here, because I want to write something about it separately and this could otherwise become unreasonably long. I will just say the hugest of thank-yous to Pete Mattock (@MrMattock) for stepping in and lending me his laptop at the last minute – the crisis was averted thanks to him! Similarly, I cannot thank enough everyone who attended and has spoken to me about it since; I really hope that you all found something in it useful (and thank-you for carrying on listening as my microphone was replaced mid-sentence!). As I say, there will be something written about it which will explain everything in full.

I found it incredibly difficult to choose which workshop to attend for session 4! Luckily, I had two colleagues who were also at #MathsConf with me, so the decision was made to split up and to feedback to each other later. I went to Pete Mattock’s session (@MrMattock) on ‘Time to Revisit… Teaching For Mastery’ and I am so glad that I did.

There was so much to take away from Pete’s session that it is hard to know where to begin! He made the point that students who achieve the best outcomes have typically had a mixture of ‘teacher-directed’ instruction and ‘inquiry-based’ methods. Specifically, teacher-directed approaches appear in most/all lessons or learning episodes, and inquiry-based approaches appear in some. Too frequently, it is easy to see Maths education as a series of dichotomies which can be really unhelpful – it was refreshing to see the fact that both approaches have a valuable role to play.

Pete took us through a number of different ways of modelling different mathematical procedures –  and made the point that just teaching ‘rules’ is unhelpful. An excellent example he gave was that of BIDMAS: students who are often exposed to BIDMAS are taught it as an arbitrary set of rules that must be followed, but Pete made the point that the correct priority of operations is a mathematical necessity. He supported this with visual representations, which I still need to explore more for myself before showing to students, but which were incredibly powerful.

I also loved the way in which Pete showed the addition and subtraction of negative numbers. I’ll be honest: I have tried teaching adding and subtracting negative numbers in multiple different ways to multiple different classes, but never particularly successfully. I have tried pattern-spotting and analogy and rule-following and number-lines and everything has seemed to collapse at some point, and students revert back to ‘two minuses make a plus’. The model that Pete showed involved modelling negative numbers as vectors: I cannot do justice here to how effective it was, but I will definitely be using it in future. (I will also point out that Pete has a book being published soon – you can order it at: https://www.crownhouse.co.uk/publications/visible-maths), which includes these ideas.

We also looked at the division of fractions using a Cuisinaire rods approach – this is another topic which frequently comes back to rule following (‘keep, flip, change’) and it was so useful to see a model that actually works and provides meaning to the process. Finally, I am so pleased that Pete spoke about ‘exit strategies’. He made the point that our students won’t have access to manipulatives in exams, and that often, drawing diagrams is a more time-consuming approach than being able to answer a question without. Pete modelled how, over time, he will move his students onto a more ‘abstract’ approach, but this has acquired meaning through the multiple representations that students have used on their journey.

Overall, I had the most fantastic day! MathsConfs are such well-run events and there are so many different workshops being offered that you can really tailor the whole day to suit your own personal CPD needs. Thanks so much to everyone who makes the day what it is – see you all in Bristol in March for #MathsConf18!.